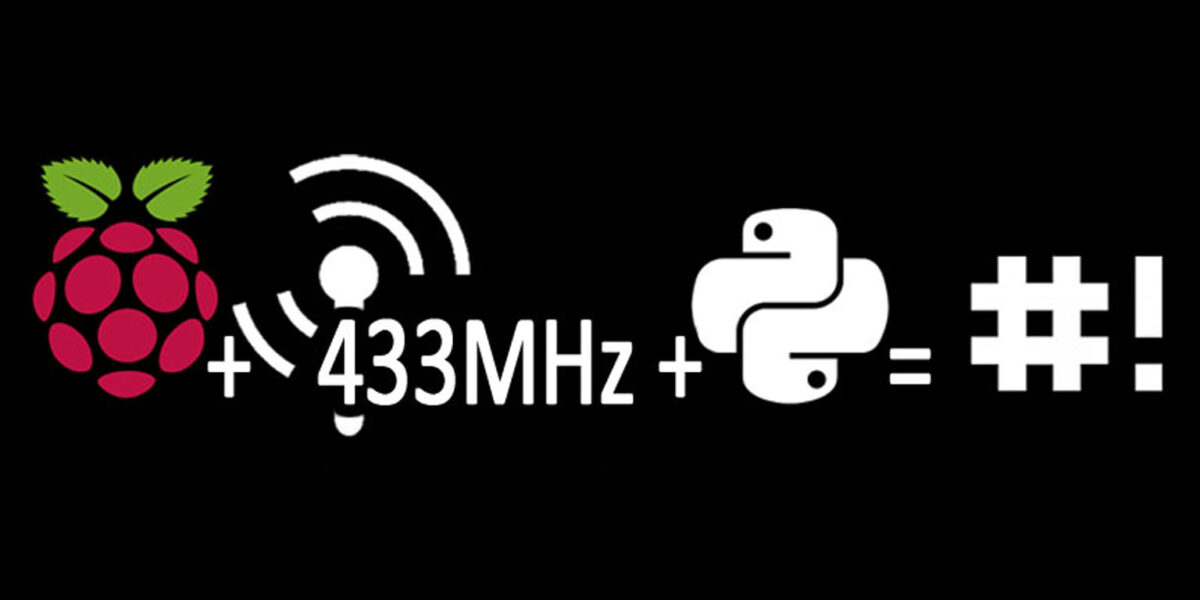 This post will explain how to get the Raspberry Pi to read and interpret RF signal-codes to be used for logic. Ultimately I’ll show you how to “capture” signals as strings and compare them with expected strings to trigger either a Bash or Python script.

First of all, you need a fully functional Raspberry Pi with Raspbian installed. In order to get started with Making the Raspberry Pi Use RF Signals for Logic, I’m assuming that you also followed and completed 433MHz RF Communication to a Raspberry Pi. After the setup, we will need the command line to do some testing and write some Python and Bash coding to receive signals and apply logic to them. It’s easier than you might think! If you don’t have a screen, keyboard and mouse you will need to be on a network and use PuTTY and/or WinSCP for the setup, coding and testing.

For easier testing purposes I recommend having additional set of working speakers/earphones connected to the audio jack of your Raspberry Pi, especially if you’re not going to use the HDMI cable for sound.

For this tutorial you will also need:

With this piece of coding the Arduino will send the decimal code ‘1234’, wait for four seconds and then send ‘4321’. It will run over and over until the Arduino’s power is disconnected. There are many ways to incorporate microcontrollers with code and other modules to give specific signal-codes, but for now we will only use these two signals (‘1234 & ‘4321’).

Make sure the Raspberry Pi receives them correctly.

It was mentioned that after installing wiringPi and 433Utils we will be using 433Utils’ RFSniffer.cpp to receive signals.

RFSniffer.cpp only reads and displays the signals it received on the terminal. To continue we will need to modify this file and bring in a Python script file to do the logic part where the modified RFSniffer.cpp will trigger the Python file.

copy the following script-code to it:

and make it fully accessible for all:

When triggered, the Python script will log the signal to /home/pi/logs/sniffed.txt. You can change these destinations if you like. It will sequentially log them one by one in the same file.

To edit and recompile RFSniffer.cpp, you need to be in the 433Utils/RPi_utils directory:

First, create a backup of your original file,

then open and edit the file,

and remove all the old code and copy and paste the following code to it:

This code snippet will chain together signal-codes received in a short frame of time as they are received. These signal-codes are passed in as comma-separated-values to your python script (argument -s code1,code2,code3).

Remember to save your changes (Ctrl X & y).

To recompile the changed code, while still in the 433Utils/RPi_utils directory use:

After successfully compiling your file, go back to the /home/pi directory (cd). To start RFSniffer you can use the following command:

The terminal will now be waiting for RF signals and if it receives them, will display it on the terminal screen and also send them intermittently to the Python sniffer script. You might be seeing other code in between there as well, but it should mainly be ‘1234’ followed by ‘4321’. If you received these code signals on your terminal, also check your /home/pi/logs/sniffed.txt.

That’s the basis of sending and receiving RF signal-codes on a Raspberry Pi. When RFSniffer is running, you will now be able to use the signals in the sniffer.py file for further logic. You can keep your Arduino running, but exit out of RFSniffer by pressing Ctrl + Z.

A part of the adopted Python file is an additional Python file that will store our recognised codes and command lines. In the same directory as your initial sniffer.py (/home/pi/bin) create an additional file called sniffer_commands.py:

Copy the following script-code to it,

exit and save (Ctrl X & y) and make it fully accessible for all:

This is the file you will edit in the future to update your signal-codes and paths. You can add as many signal codes with their respective paths as you like as long as you keep the layout the same. You can do so then by using:

Now we’re going to adapt the initial Python file, /home/pi/bin/sniffer.py to issue these commands once your specified code-signal has been received.

To open and edit your /home/pi/bin/sniffer.py file again use:

Remove all the previous code and paste the following updated script-code to it:

The additional code will take the chained signal-codes and break them into single signal-codes. It will then compare them one by one with the contents of the /sniffer_commands.py file to see if there is a recognised signal-code linked to a path. If the signal-code is recognised, it will trigger that file.

To test whether a command line is triggered, we’ll write two little Bash scripts each containing a specific eSpeak command to test.

Paste the following code to it,

and make both files accessible for all:

Fire up RFSniffer again and let it happen:

You should now hear eSpeak’s robot voice every time a Bash script is triggered!