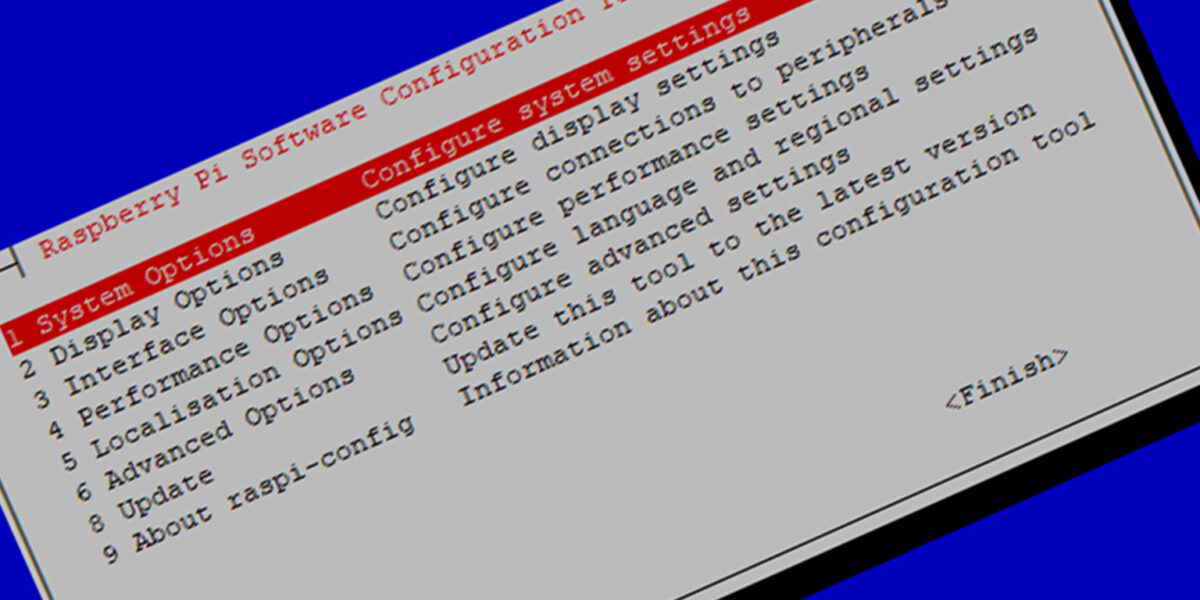 TThere are a couple of things to do to get better functionality out of the Raspberry Pi. The Raspi-config tool is the first place to start.

Important configuration options include changing the default username and password, expanding the filesystem, language and regional settings,  display and audio settings and activation of hardware ports.

All these and more can be done using the Raspberry Pi (Software) Configuration tool (aka Raspi-config or the Raspi-config tool).

Also see
WTF is the Raspberry Pi?
What you need for your first Raspberry Pi build
Basics of installing an operating system on a Raspberry Pi

The Raspberry Pi can be easily connected to a local area network (LAN) with internet access using an Ethernet cable, but a Wi-Fi connection can also be configured (see later).

After the initial setup, the Raspberry Pi terminal can be accessed using PuTTY over a network.

Also see
Using PuTTY to connect to a Raspberry Pi

Note that the order and grouping of the layout of Raspi-config might differ slightly depending on the Raspberry Pi distribution use. On newer distributions, some of the settings (e.g. Bluetooth and Wi-Fi) can also be configured without using the Raspi-config tool.

Accessing Raspi-config from the terminal

When the Lite version of Raspbian is installed, it will boot straight into the terminal asking for a username and password.

The default username:password for Raspbian is pi:raspberry.

The terminal can also be accessed from the Desktop by using a mouse and clicking on the Terminal icon.

To access the Raspi-config tool from the terminal, the following command is used:

The terminal version of Raspi-config is in the form of a menu where each menu item represents a group of configuration settings.

The arrow keys on the keyboard are used to navigate between the menu items. The Enter key is used for selection and the Esc key is used to cancel certain options, go back, and exit Raspi-config.

Accessing Raspi-config from the desktop

When the Full Desktop version of Raspbian is installed, it will boot into the GUI. From here, Raspi-config can either be accessed using the terminal or by choosing it from the Applications menu under Preferences.

On the Desktop, the Raspi-config tool is situated under Raspberry Pi Configuration under Preferences in the Applications menu.

Settings on the Desktop version of Raspi-config is changed using a mouse and keyboard.

On some Raspberry Pi distributions, the very first Desktop boot might open some Raspi-config options automatically. Known ones include extending the file system, changing the username and password, underscan/overscan, and localisation settings. They can be set here and/or later again.

It is important to go through each menu item of the Raspi-config tool. Some settings are more important than others.

It is important to Update the Raspi-config tool to its latest version before setting any of the other settings. To update Raspi-Config, select Update from the main menu. On some distributions, the update item is situated under Advanced Options.

Some settings are highly recommended, some are optional, and some are required.

When installing an operating system for a Raspberry Pi, a portion of the MicroSD card will be unused. To ensure that all the space of the SD card is available for Raspbain, the filesystem should be expanded.

The Expand Filesystem menu item is either available on the main menu or under the Advanced Options menu.

Network configuration options include setting up Wi-Fi and enabling SSH.

Note that when the Raspberry Pi is connected to a LAN, a dynamic IP address will be automatically created.

As from Raspbian Stretch, the Raspi-config tool can be used to set up Wi-Fi. The wireless LAN settings are usually set under Network Options -> Wi-Fi,  but might also be situated under System Options on some distributions.

To set up Wi-Fi, the country, the network name (SSID) and password (also called the passphrase or pre-shared key) need to be entered.

It might be easier to set a Wi-Fi connection using the Desktop instead.

SSH (Secure Socket Shell) is a network protocol that provides a secure way to access a remote computer (in this case the Raspberry Pi) by using username/password authentication. On some Raspbian distributions, SSH is enabled by default.

When a ‘connection refused’ error is received when trying to connect with, for example, PuTTY or WinSCP, try enabling SSH first. SSH will pose a security risk if it is not used, in which case it is better to disable it.

By default, a user with the username of pi with a password of raspberry will be created as the first user. This user has root/sudo privileges which will give full administrative permissions to the person who is logged in.

The Change User Password menu item will allow the logged-in user to change the login password. Changing the password, especially for the user ‘pi’, adds to the security of the Raspberry Pi.

The next time the user is prompted for a username and password, this password will be accepted instead.

The default audio output will be set to either auto or HDMI. The Raspberry Pi can also be forced to only use the 3.5 mm (headphone) audio jack or the HDMI port.

The audio output hardware settings are either situated under Advanced Options -> Audio or under the System Options menu item.

The audio output hardware settings are stored in the /boot/config.txt file.

Depending on the distribution used, the display option items are either grouped under the Display Options menu item or under the Advanced Options menu.

The resolution is a measurement of the sharpness and clarity of an image. It is mainly dependent on the display device (e.g. TV, computer screen, etc.). Higher resolutions need more processing power from the Raspberry Pi, so setting the correct resolution is important for speed too.

In most cases, the default resolution will be fine, but 720p @60Hz will be more than enough if a choice has to be made. Smaller resolutions might be more fitting for older or atypical screens. Being able to display 4K resolution, the Raspberry Pi 4B might have some performance issues on 4K screens — in which case the resolution can be adjusted.

The output resolution of a Raspberry Pi is set under the Resolution menu item.

The Raspberry Pi 4B is known to have some issues with its resolution settings. It typically only accepts the highest resolution of the display device, which is mainly a problem with 1080p and 4K displays.

The problem with the Raspberry Pi 4 is that the Raspi-config Resolution setting might not work as expected and needs to be set manually using the boot configuration file (config.txt) using terminal commands.

To do this, the resolution settings are manually set as the HDMI group (HDMI_group=) and HDMI mode (HDMI_mode=).

There are two HDMI groups:

The line to add in the config.txt file will look something like this:

After determining the HDMI group, decide what resolution to use. This will be set by HDMI mode.

To edit the config.txt file use:

The lines should be added after the last entry of the file. To, for example, use a CEA screen at a resolution of 1280×720 @ 60Hz the two lines to add will look as follows:

After the HDMI mode and group have been set, press Ctrl + X keys to exit, then Y for yes, followed by the Enter key.

The new resolution setting will take effect after rebooting the Raspberry Pi:

If, for any reason, the display stops working after the change, holding down the keyboard’s Shift key while the Raspberry Pi boots will ignore the boot configuration file and load the default settings.

Overscan (in the form of disabling underscan) might, or might not create a fuller image if there is a border around the screen. It will also allow compensation for screens using overscan.

The localisation settings will set the default language, time zone and keyboard layout for the Raspberry Pi.

Change Locale will set up language and regional settings and Change Timezone will set the clock offset (difference) from Coordinated Universal Time (UTC) determined by your country. More than one language can be selected, after which the default language will be asked. As a South African, I usually choose UTF-8 en_ZA.

For the Change Keyboard Layout menu item, I usually choose the Generic 105-key (Intl) PC setting and then when prompted next under Keyboard Layout I choose English (US). I don’t use keyboard functions so I just choose the default settings there.

The Change Wi-Fi Country option is only available from Raspbain Jessie.

After these settings have been configured, use the Back option to enter the main Raspi-config menu again.

After all the settings have been configured, the Raspi-config tool can be exited by selecting the Finish option. Even if the Rapi-config tool does not ask for it, it is always recommended to reboot the Raspberry Pi afterwards.

Before moving on from the first-time setup, Raspbian should be updated. This can be done before or after rebooting (mentioned in the previous step). Running updates regularly on the Raspberry Pi ensures that all the software packages are up to date.

This will ensure smoother operation, fewer security vulnerabilities, and better compatibility. To be able to update Raspbian packages, a connection to the internet is required.

Raspbian is updated with the following two terminal commands.

This post discussed the Raspberry Pi first-time setup. Hardware and operating system-related configuration can be accessed using the Raspi-config tool.

It is important to go through the Raspi-config tool at least once after the operating system has been installed.