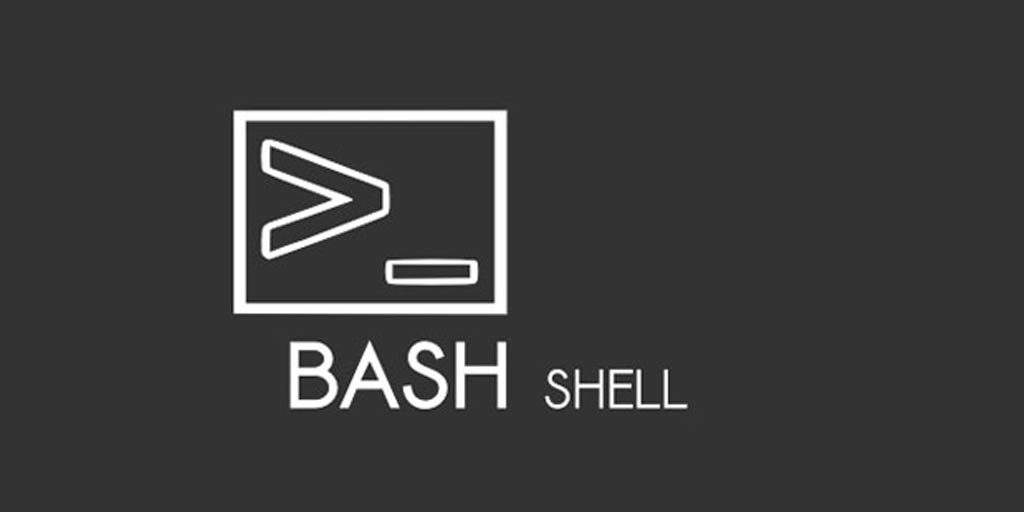 The Raspberry Pi is a great stand-alone device that has the ability to use Bash scripts. Bash scripts allow multiple commands to be executed one by one.

An introduction to BIN Bash-ing on Raspbian explains some very basics of Bash script files, how to create and edit them, set their privileges, where to store the files and ultimately how to execute them.

In the process, it will also show how to work with Linux directories, move, duplicate and remove files and how to create and remove directories. For a summary of all these commands, see the bottom of this post.

Bash shell, or simply Bash, is a standard shell for Linux users. When using most Linux systems, including Raspbian, the operating system’s user commands can also be in the form of typed commands in the terminal. After each command is typed the Enter key is pressed for it to be executed. These commands and how they are interpreted by the system are called Bash. Commands include the execution of files (e.g. running programs, Python or Bash files or Bash scripts).

A Bash script consists of one or more Bash commands. Anything that can be executed in the command terminal can be placed into a Bash script. Each line of the Bash scrip represents an Enter key. Bash scripts are saved as .sh files. Bash commands inside a script will be run sequentially.

Both Bash and Bash scripts can be scheduled to be executed by Cron.

To sudo or not to sudo

By default, Raspbian is configured to have one ‘superuser’. This is usually the user type that most Raspberry Pi users will be using (after logging in with pi:raspberry at the command prompt). By following the rest of this post it is assumed that the superuser is used.

Bash scripts are written as text files containing individual Bash commands. Each command is written as a separate line. Bash scripts are saved as .sh files. Before creating the Bash script, make sure to be in the default working directory by using the following command:

In this case, the file will most likely not exist and Nano will open a blank file. 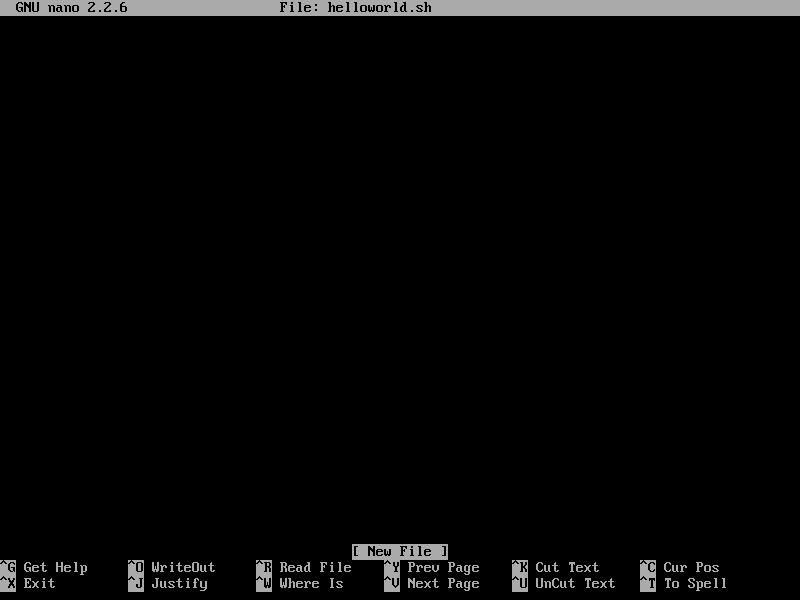 To start editing the Bash script file, add the ‘shebang’ as the first line:

The shebang should be added as the first line of all Bash scripts. The /bin/bash part is the interpreter. This tells Raspbian system that it is a Bash script and what shell to use – in this case Bash.

The hash sign (#) at the beginning of the shebang tells Linux not to see it as code, but because it is the first line it will still attempt to identify the interpreter.

A more traditional use for the # is as a commenting marker. In Linux, hashes is used to precede notes or to temporarily deactivate commands. Now, add the following commenting marker to the second line of the script:

To save the Bash script, press and hold Ctrl+x, and then press y. For now, use the given name and directory for the file to be saved in (i.e. press Enter).

In order to keep things organised, files on an operating system are stored in directories. On the Raspberry Pi running Raspbian, the default user directory is /home followed by the username, in this case as /pi. Each time the system boots, Raspbian will start in this (/home/pi) directory. When the user is inside this directory it will not show on the terminal.

When a command is given, Raspbian will assume to use the directory the user is currently in. At any time, the user can use the pwd command to see where the command will be triggered from.

After the Bash script has been saved, the user will be returned to the terminal. By default, Nano will prompt to save files in the current working directory. In this case it was /home/pi. To list all the files in this directory, the dir command can be used. This will show the newly created helloworld.sh.

Any directory within /home/pi can be used, but many Linux users like to use the /bin directory for their Bash script files. To create a new directory the /mkdir command, followed by the directory name, is used. Use this command as follows to create a /bin directory inside the/home/pi directory:

By using the dir command again from the /home/pi directory, the /bin directory, together with helloworld.sh file, will be listed. 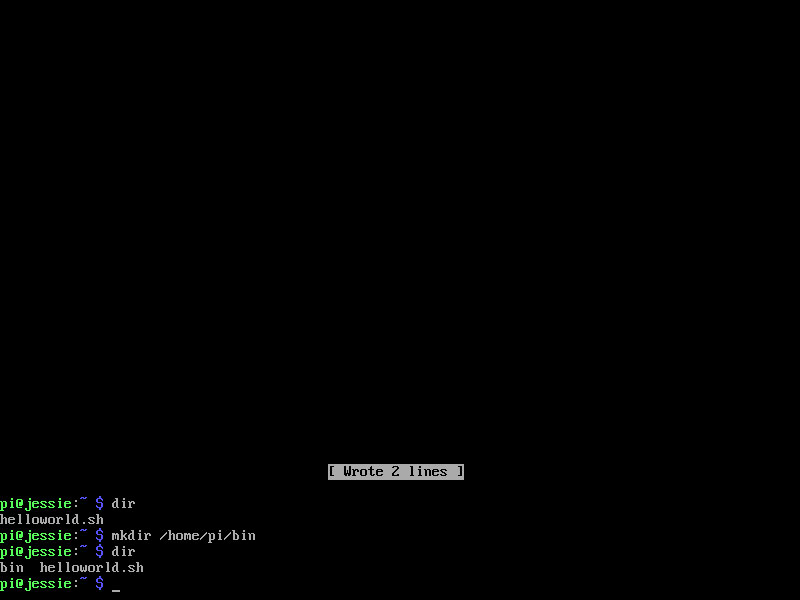 Moving to a directory

By using the cd command on its own (i.e. without the name of a directory), the user will be taken back to the default user directory (in this case, /home/pi).

Moving or copying files between directories

Both these commands are followed by the file to be moved or copied (including the target directory) and the destination directory:

To move helloworld.sh to the newly created bin directory, the command is used as follows:

To see if the file has been moved, use the following two dir commands: 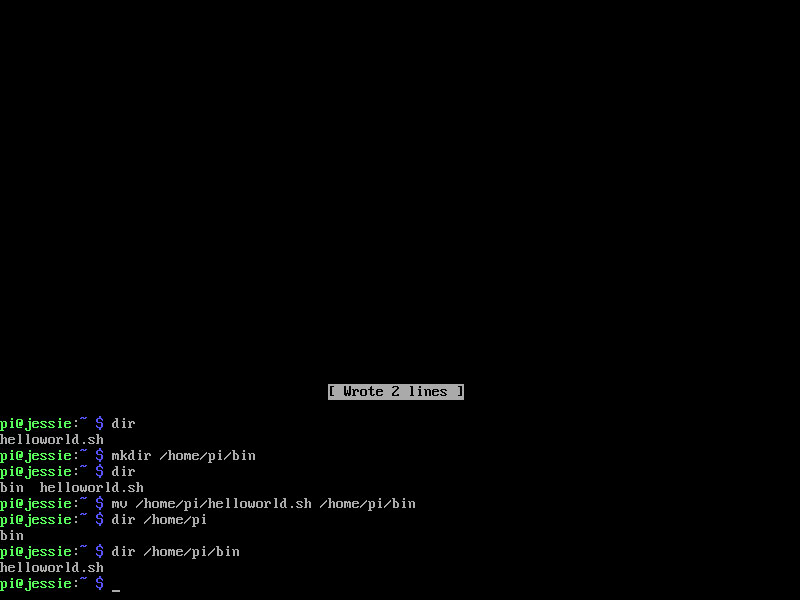 Now that the Bash script has been moved to the /home/pi/bin directory, for our purposes it is ready to be updated with more commands. To open the Bash script file again, use the nano command again followed by the file to be edited – in this case helloworld.sh:

To illustrate, the echo command will be used, but by doing some searching on the internet, any Bash command can be used. In Bash, the echo command is used to print some desired text on the screen. Add the following line to the Bash script:

Here, the echo command, will display the text between quotation marks on the screen – Hello, world… The quotation marks are to identify the beginning and the end of the text to be displayed and will not be ‘echoed’.

Press and hold Ctrl+x, and then press y to save the file again. 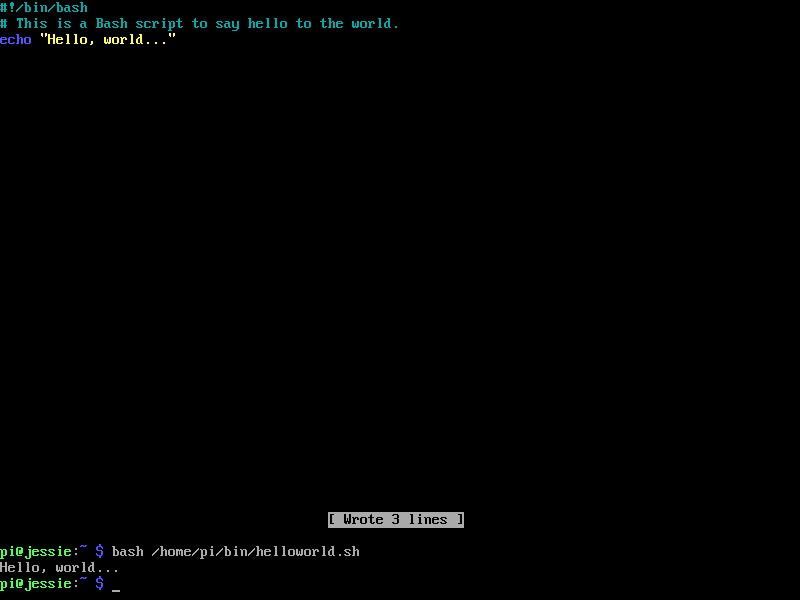 Removing/deleting a file or directory

To delete helloworld.sh the rm command can be used as follows:

The rmdir command is slightly different from the other directory-related commands in that only empty directories can be deleted and that the user cannot be inside the directory while attempting to delete it (sometimes).

Create and Edit a file:

Remove a directory (needs to be empty first):