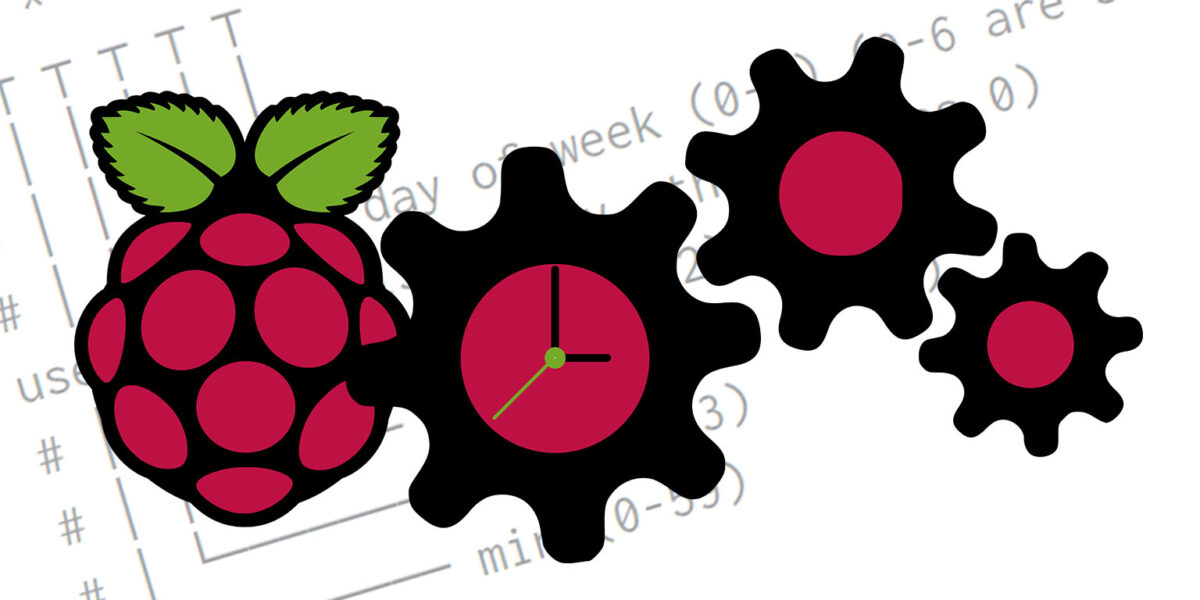 Introduction to Cron on the Raspberry Pi

Cron, also known as Crontab (aka cron table) has a scheduling formula for any minute of any day of the week, month and any year in the future. It is perfect for scheduling repetitive commands (also known as Cron jobs, Cron entries or Cron tasks) or commands that should be executed at specific dates and times.

Cron is often used for tasks like log rotation, backup scripts, updating file indexes and running custom scripts. Entered commands can be in the form of Bash or Bash scripts that are meant to be automatically executed periodically at fixed times, dates or intervals.

All versions of Raspbian have the ability to use Cron. Raspbian on a Raspberry Pi is also a great stand-alone device that can be used to monitor, control and execute computer-related functions.

The command executed for a Cron job is a piece of shellcode. Everything on Linux has a shellcode or terminal command. It can be anything from running a simple Bash script, or any one-line Linux command. Python scripts can also be used.

Through some searching, even commands on the GUI can be converted to terminal commands. These commands can all be added to execute on (a) specific time/date(s) or even repetitively as Cron jobs.

Running as root, Crontab entries can also be used with sudo.

One Cron table can contain one or many, Cron jobs. After creating a Cron table for the very first time, some systems will give the option to choose the default editor for editing the tables. For this post, it is recommended to use nano to create a Crontab.

Creating a Crontab for root

Although each user on a Linux system has access to its own Crontab, it often makes more sense to have one Crontab running from root — e.g. when using a Raspberry Pi.

The root user has permission to run any command on any username. On Raspbian, Cron doesn’t require a user to be logged in to run the jobs.

To create, and later edit, a Cron table for the root user, the crontab command can be used:

Creating a Crontab for a specific user

As mentioned above, each user on a specific Linux system has access to its own Crontab. Although not the norm, in some cases it might be necessary to have a user-specific cron table.

To, for example, create, and later edit, a cron table for the user ‘john’, use:

would run the backup.sh script every day at midnight, and

would run the logging.sh script every 10 minutes.

To create cron entries without thinking too much, Generateit.net’s Cron Job Generator can also be used.

Because each command is basically a piece of shellcode, a test statement can also be added to give additional control over when a command will be executed.

Test statements are for example IF and conditional statements in Bash. As an example, a test statement would be needed to run a Cron job exactly every 2 days (some months for example have 31 days and the simple method [below] will not work):

By adding a test statement this can be fixed:

In the event that a task/script generates an output message, Cron will automatically try to email the local administrator of the device. Output messages are either in the form of standard messages/intended output (stdout) or error messages (stderr).

When an email server (e.g. by using sSMTP) is not defined, Cron will try to send an email to itself (generally not visible or noticeable). By using an email server, Cron can be configured to use the correct email instead.

will run the command every minute of every day.

will run every 10 (or N) minutes. Similarly

Running a Cron command at bootup/reboot

will run once every time Cron, i.e. the system, boots up.

Running a Cron after bootup/reboot

will run once, 10 seconds after every reboot.

In the case where a script has an output, it will be piped to output/standard message (stdout) or as an error message (stderr).

When an email service (e.g. SSMTP) is activated, this stdout and stderr are what will be emailed to the indicated recipients.

By ‘piping’ messages to /dev/null, stdout will not be emailed. For example:

will run 10 AM/10:00 every 1st day of every month. The intended output of the script will not be sent to email (but errors will still be emailed).

Similarly, adding > /dev/null 2>&1 stderr and stdout will not be emailed.

Running a Cron command on the first day of the month

will run every Tuesday at 8 AM/08:00, but with the test statement, the command will only trigger at 8 AM/08:00 on the first Tuesday of every month.

Making a backup of a Cron table

It is always a good idea to make regular backups of Cron tables.

will make a backup of a specific user Crontab (e.g. in the /home/pi directory).

Crontab backups can be retrieved by:

Cron is a great way to schedule repetitive commands or commands that should execute at specific times, days, weeks, months or even years. Together with the Raspberry Pi, Cron can be used as an automation device.

WTF is the Raspberry Pi?
Raspberry Pis are low-cost, credit-card sized computer boards that can plug into a TV. Being tiny they are often used for electronic projects and specialised devices at home. More…
Categories
Raspberry Pi
Tags
BluetoothGPIOLinuxRaspberry PiRaspbianUSBelectronicsmicro-processorsonline shoppingspecswi-fi

Using WinSCP to connect to a Raspberry Pi
WinSCP is a free SFTP, SCP and FTP client for Windows. Apart from other functions, WinSCP is used to view and copy files and folders on a remote Raspberry Pi. More…
Categories
Raspberry Pi
Tags
KodiLANOpenELECPuTTYRaspberry PiRaspbianRetroPieSCPSSHWinSCP