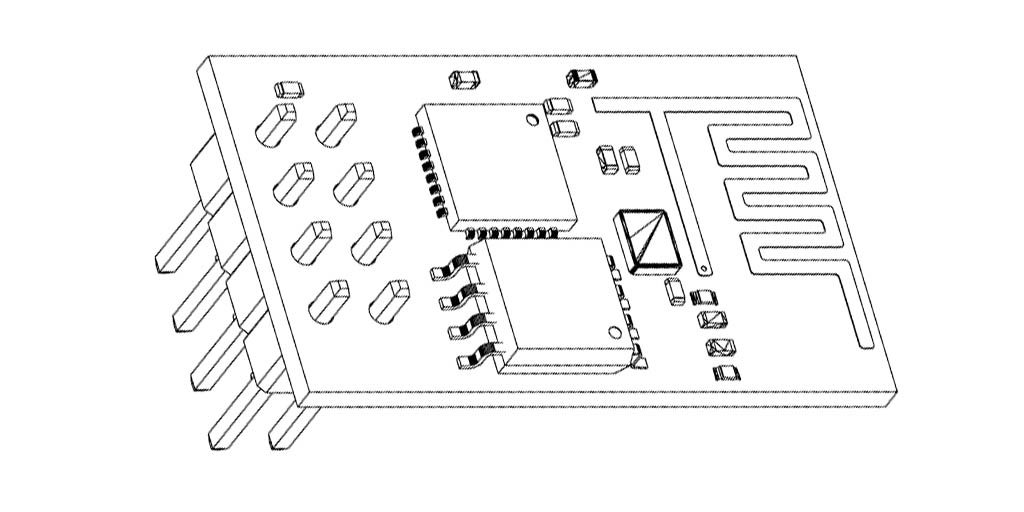 ESP8266 microcontrollers are designed for communicating over the internet whrough Wi-Fi radio signals. It has on-board processing and memory that allows it to be integrated with electronics through its GPIOs. With the ESP-01, two GPIO pins are available (GPIO0 and GPIO2).

Today, ESP8266 microcontrollers have been incorporated into many microcontroller boards (e.g. the ESP-01, ESP-02, etc.). The first ESP8266 chips were developed and manufactured by the Chinese company, Espressif Systems. What makes these chips popular are their full set of networking protocols with Wi-Fi connectivity.

Even when fully functional, ESP8266 chips are considered low power consumers. The voltage requirement is 3.3V DC. Typically, the chip draws about 80 – 170 mA. It also supports three lighter power modes: light sleep (0.5 mA), modem sleep (15 mA) and deep sleep (0.1 mA). At certain times (e.g. bootup or when the chip ‘wakes up’ from a sleep mode) the peak operating current can be as high as 320 mA.

3.3V DC power is supplied to the ESP-01 module via the VCC and GND pins. 3.3V also needs to be supplied to the CH_PD pin. Each I/O pin will supply up to 12 mA of current.

Although the ESP8266 chip has 17 GPIO pins, the ESP-01 only has three working pins (one is connected to the blue on-board LED). The ultimate goal is to be able to control these three pins using Wi-Fi. In order to achieve this, the chip needs software – called firmware. The firmware allows access to the chip, determines what commands can be used and how to respond to them.

Terms such as ‘flashed’ and uploaded are commonly used for the process of adding software to a microcontroller. Programming (or ‘flashing’) refers to uploading (custom or pre-configured) software (or firmware) to the ESP8266’s flash memory – where it is stored until it is flashed again. Flashing is done using a serial-UART interface. For more software information, see the Programming libraries section below.

The ESP8266 chip has (at least) two different boot modes: ‘normal mode’ and ‘programming mode’. To be able to upload new software/firmware to the chip, it needs to boot up in programming mode. Flashing will overwrite the previous software (including the AT command set if that was flashed).

There are more than one serial to USB converter option available. With the correct information, an Arduino can also be used. A good option includes the FTDI USB to TTL serial converter module. It has a 3.3/5V DC jumper and will supply 500 mA through its Vc pin. Also read more about connecting the ESP-01 module to a breadboard and FTDI programmer for flashing.

The ESP-01‘s current firmware can be replaced using downloadable or custom software written with an appropriate software development kit (SDK). There are a few different firmware, software and SDK options available.

Many ESP-01s will come pre-programmed with firmware that uses AT commands. Various other ESP8266 AT command processor firmware options are available for download on the internet.

When an AT command processor is installed, AT commands can be used to change some of the default hardware settings or to trigger the GPIO pins. Although the AT command set is stored in the memory, the hardware settings, e.g. after being changed, are not – meaning that these settings need to be updated after each boot. AT commands can be given using a serial-UART interface or by using an external software application (TCP connection software) which is able to send commands over Wi-Fi using the same baud rate that was set up on the ESP8266.

With this option, no specific programming language, just the AT commands, is necessary to be able to use the module.

Fortunately, Espressif made a Software Development Kit (SDK) available that allowed users to flash different firmware options to the ESP8266.

NodeMCU is one of the more popular alternatives for firmware running on the ESP8266. It runs a Lua interpreter on the ESP8266 processor, which is able to execute commands written in the Lua scripting language (almost like a little operating system).

Lua script files are written and saved in .lua format. NodeMCU allows GPIO and hardware functionality such as i2c and PWM. These script files also allow the setup of hardware settings.

With this option the user has access to an extensive range of the Lua functions and sample code for writing their own applications.

More recently, the ESP8266 community created an add-on for the Arduino IDE that allows Arduino-like (C or C++) programming to be uploaded as software. The ESP8266 is added as a third party ‘core’ using the Boards Manager. Also see adding the ESP8266 board to the Arduino IDE for more information.

This option uses a compiled solution. There is no interpreter. The Arduino IDE takes a sketch and compiles it, includes the related library functions and produces a complete standalone piece of firmware in the form of a binary file. The entire binary file is then uploaded. Also see using the Arduino IDE to program the ESP8266 for more information.

By adding the ESP8266 core to the Arduino IDE, an extensive range of libraries and sample code is also added.

For advanced users, there is the esp-open-sdk toolchain which allows direct programming to the ESP8266. Python (MicroPython) and Javascript ( Espruino can also be used, but at the time of writing, all these packages were still in early development.

Like many microcontroller boards, the ESP-01 has an on-board power (red) LED and a Wi-Fi indicator/Tx (blue) LED. The blue LED and Serial.print() commands cannot be used at the same time.

To get started with the ESP-01 you will need

These were the parts that were used. Most are available from BangGood, eBay and RS Components. Direct links to some of the parts are supplied lower down.

Using the Arduino IDE to program the ESP8266
After several steps of preparation, the ESP8266 can finally be programmed. Fortunately this step has been made fairly simple by using, what is a familiar platform for many, the Adruino IDE. This post will show how to upload a few variations of the basic Blink sketch to an ESP-01 together with the wiring of LEDs. More…
Categories
ArduinoESP MicrocontrollersElectronics
Tags
Arduino IDEESP microcontrollerESP-01ESP8266electronicsprogrammingsoftware

Understanding the colour wheel
The colour wheel is a 360-degrees representation of colour hues organised in a circle. It can be used for the visual representation of the relationships between primary, secondary and tertiary colours. More…
Categories
Graphic DesignHitFilm ExpressPixel ArtWebsite DevelopmentWordPress
Tags
colour palettescolour wheelcoloursgraphic designpixel artwebsite development

Fonts in WordPress — how to add them
The right typeface can significantly contribute to the overall style and feel of a website. Here we discuss the basics of adding fonts to a WordPress website. More…
Categories
Website DevelopmentWordPress
Tags
CSSGoogle FontsWordPressfontsfunctions.phpplugin developmentspeed optimisationtheme developmenttheme stylingtypefacewebsite development