We discussed how to install WordPress on a Raspberry Pi. Having a local network version of WordPress makes the development of plugins and themes so much easier. By using a popular Visual Studio Code extension the coding can be done from a remote computer.

By using VS Code to access WP on a Raspberry Pi, development can take place in a live environment. File version management can be done using VS Code’s built-in Git functionality and file transfer can be facilitated using WinSCP.

WordPress on a Raspberry Pi

The WordPress root directory /var/www/html (or /var/www/html/wp-content to get to the plugins and themes). Similarly to WinSCP, this is the directory that needs to be used by VS Code.

Theme and plugin development can take place using VS Code while working live on the Raspberry Pi WordPress site. The VS Code Remote-SSH extension can be used to connect to the WordPress server from a remote location (in this case a desktop running Windows).

For the Remove-SSH extension to work, SSH needs to be enabled on the Raspberry Pi.

At the time of writing, the Remote-SSH extension was at version 0.62.0, had over 2.5 million downloads, and a five-star rating.

After the Remote-SSH extension has been installed (by pressing the blue Install button), a Remote Explorer icon will appear in the VS Code Action Bar. From here, new remote connections can be configured.

New remote locations are added by pressing the + button situated next to the SSH TARGETS tab and entering the SSH connection command. To connect to a Raspberry Pi, the connection command will look something like this:

You can either specify a new configuration file or choose an existing one. The easiest is by choosing the file in the Users directory (usually shown first in the list).

By opening the config file, the user and IP address details just entered will appear. By connecting, VS Code will connect to the remote location (see later).

Before a connection can be established, the Config file needs to be altered. If you were not fast enough to press the Open Config button using the popup screen, the config file can be opened by pressing the Configure icon next to the IP address under the SSH TARGETS tab.

The same config file that was used to save the hostname details needs to be selected again.

VS Code would have saved the IP address entered earlier as both the Host and HostName entries. When using VS Code to access WP on a Raspberry Pi, the HostName needs to be changed to the hostname of the Raspberry Pi.

The same reasoning can be used to aff additional remote locations to VS Code.

After the Config file has been altered, remember to save it before closing for changes to be effective.

Making the connection to the Raspberry Pi

Now that the configuration file has been corrected, the SSH connection can be made. This can be done by pressing the Connection icon next to the IP address under the SSH TARGETS tab.

A new window will open and a popup screen will appear to ask the platform for the remote host. Rasbian is a Linux-based operating system.

When the connection to the Raspberry Pi has been established, it will be indicated with a green tick next to the IP address in the SSH TARGETS tab of the Remote Explorer sidebar. A Workspace with the correct directory structure from the Raspberry Pi can now be created. 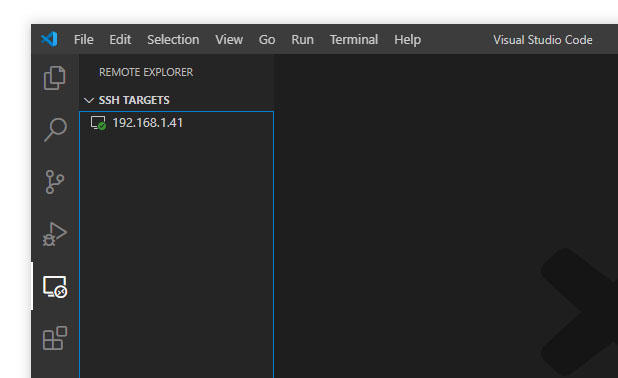 Now that a connection has been established, a Workspace with the correct directory (folder) structure from the Raspberry Pi can be created.

Workspaces are created in the Explorer sidebar (opened by choosing the Explorer icon situated on top of the Actions bar).

The Working WordPress directory would have been installed under the /var/www/html/ directory of Raspbian. To access the themes and plugins directory, the /wp-content/ directory needs to be opened.

Visual Studio Code will ask one more time for the password of the Raspberry Pi before opening the entire directory tree in the Explorer sidebar. From here, files and folders can be created, edited and removed and changes will reflect immediately on the Raspberry Pi WordPress website.

The command to disconnect from a remote location lies under the File menu -> Close Remote Connection.

To remove an SSH location on Visual Studio Code, its entries need to be removed from the Config file (see earlier). Before doing so, rather disconnect from the remote location first (see above).

After the related entries have been removed, remember to save the Config file for the changes to take effect.

Here we discussed how to use VS Code to access WP on a Raspberry Pi. The Visual Studio Code Remote-SSH extension is great for connecting to a Raspberry Pi WordPress web server. The code editor makes coding much easier and changes will reflect immediately on the Raspberry Pi server.

WordPress: Display categories without a link
The default way to get the linked category (or linked list of categories) for WordPress posts is straight forward, but this post will show how to get the category name as a string value. More…
Categories
WordPress
Tags
WordPressWordPress developmentthe_category()

What is RSS & how can I use it?
Many news-related sites and bloggers syndicate their content in the form of RSS feeds to allow users to keep up to date without always visiting their site. More…
Categories
Content Creation
Tags
FeedlyWordPress developmentcodingrsssocial media