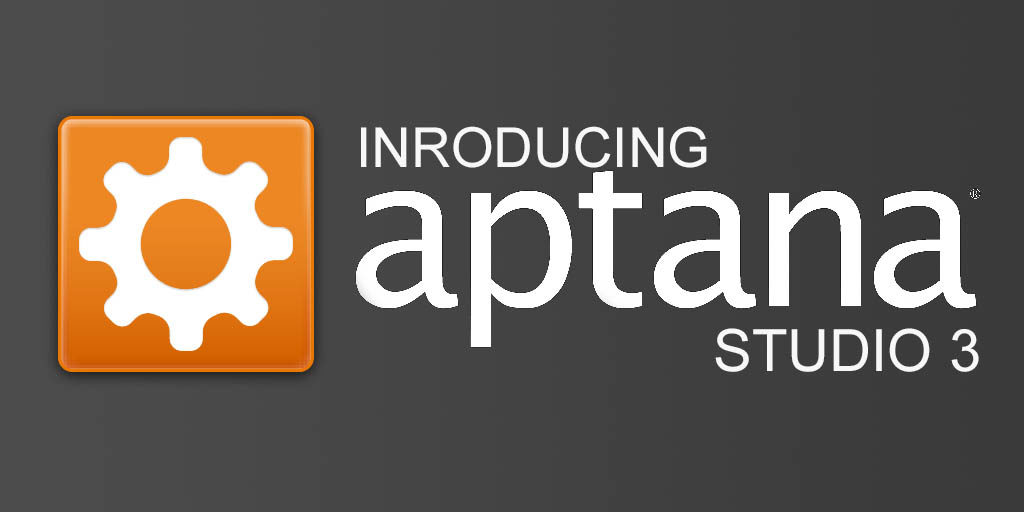 Aptana Studio 3 has long been a favourite among web developers to create and edit web applications such as websites. With its powerful features, Aptana Studio 3 makes for a great IDE to code HTML, CSS, PHP and JavaScript.

Aptana Studio 3 has long been a favourite among web developers to create and edit web applications such as websites.

This post will introduce and give a bit of background on Aptana Studio 3. It will discuss some of its great features, the installation process on Windows (based on Windows 10), setting up your first workspace and project, how to set up a remote connection and how to update Aptana Studio 3.

Aptana Studio 3 is an open-source integrated development environment (IDE) focussed on building web applications. It is based on Eclipse IDE, but with many more useful features. It supports common web-application coding languages such as JavaScript, AJAX, PHP, and Ruby on Rails as well as HTML and CSS. Support for Ruby and PHP needs additional GitHub repositories. Aptana Studio 3 can either be installed as a stand-alone (core) version or as part of Eclipse IDE. 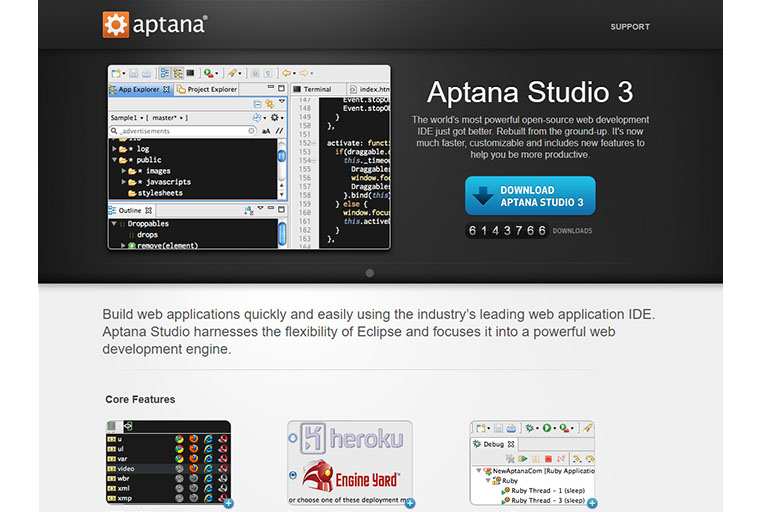 While doing some research on Aptana Studio 3, one gets the impression that it is not in active development anymore. The latest core version, at the time of writing, on Github is Aptana Studio3.7.2.201807301111. Although a (fully?) functional stand-alone version can still be installed on Windows 10 operating systems, the installation process is not explained well anywhere by Aptana or on Github. It is discussed later on this post. It also seemed like version 3.7 is only available for 32-bit architecture, and not 64-bit as with version 3.6.

Claiming to be an industry-leading web application IDE, Aptana Studio 3 has many features making it perfect for beginner and advanced programmers alike. Some of the features include:

The software also has a command terminal and a built-in web browser window to preview projects. The terminal allows quick access to execute operating system commands, language utilities and can be used with Git. Local projects and project directories can be opened in the terminal by right-clicking and then choosing Show In -> Terminal.

Before installing Aptana Studio 3, the 32-bit variation of Java Runtime Environment (JRE) 8 (and only version 8) and Git for Windows need to be installed first.

At the time of writing, Aptana Studio 3 is only distributed for 32-bit architecture (see later). For the installer to work JRE 8 (32-bit) is required.

JRE8 can be downloaded from Java.com‘s download page. If you’re using Windows 10, by simply pressing the Agree and Start Free Download button, Java.com will start downloading the 64-bit variation of JRE. By following the ‘See all Java downloads’ link at the bottom of the page, instead, the 32-bit variation can be downloaded.

To install JRE, run the downloaded file and follow the installation instructions. Note that both the 32-bit and 64-bit variations of JRE8 can be installed at the same time.

Also see
Getting started with private projects on Raspbian and Bitbucket

As mentioned previously, the download and installation process for Aptana Studio 3 is a bit confusing.

Firstly, unlike in the past, by pressing the Download Aptana Studio 3 button on Aptana.com, you will be taken to the Github page. In the past, the most appropriate variation (32-bit/64-bit) was downloaded automatically. 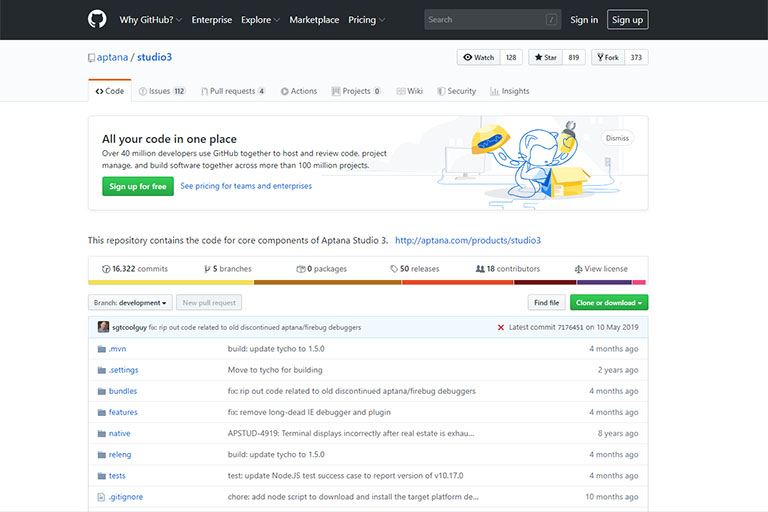 By scrolling down to ‘How to Download Aptana’ section of the README.md, the link to the actual download files can be accessed. For Windows, there will likely only be one executive file available for Windows (Aptana_Studio_3_Setup.exe). This is the file to download. In the past, Aptana Studio 3 was downloaded as a .zip file. The downloaded executive file is the 32-bit variation of Aptana Studio (i.e. the 64-bit variation will not be able to be downloaded). 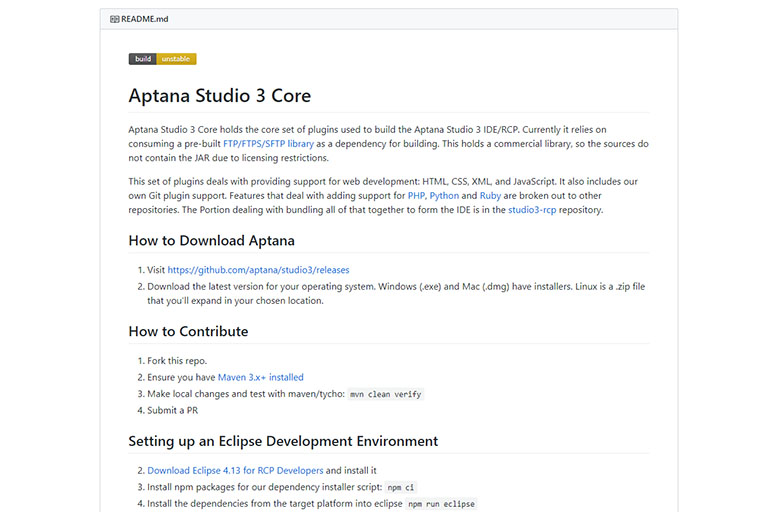 To find the AptanaStudio3.ini file, search for Aptana in the Windows search bar, right-click on App icon and choose to Open the file location. 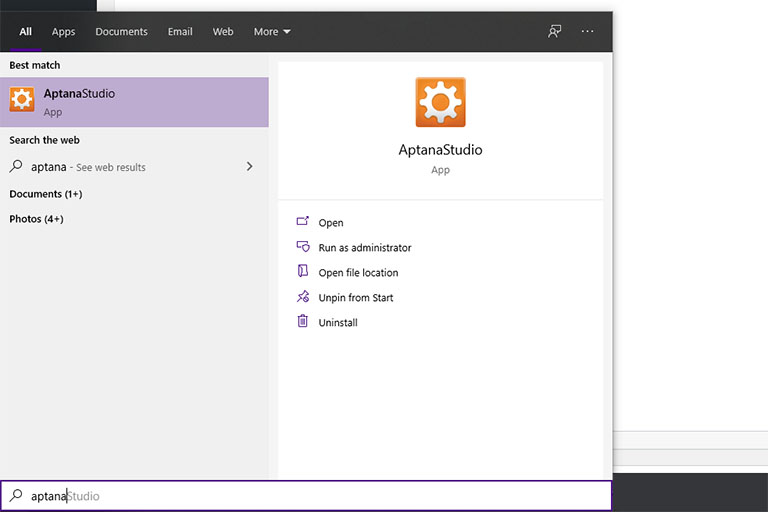 Initialisation (.ini) files are opened by using Notepad. In most cases, the AptanaStudio3.ini file can be opened by double-clicking on it. 32-bit variations of JRE is usually installed in the C:\Program Files (x86)\Java\ directory. It can be further guided to the installed version of JRE (in this case jre1.8.0_241). javaw.exe is situated in the /bin directory.

To guide Aptana to use the 32-bit variation as the virtual machine the javaw.exe path needs to be added to the AptanaStudio3.ini file:

In needs to be added before the -vmargs as follows: 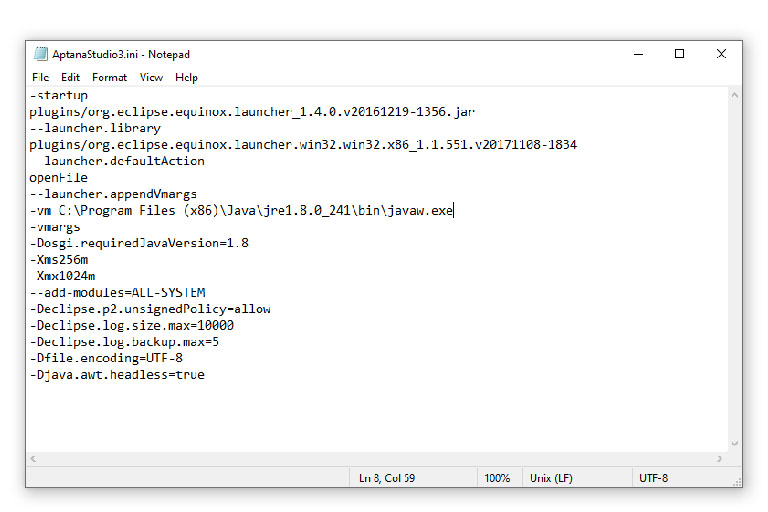 Save and close the file before opening Aptana Studio 3.

Creating a workspace and project

Upon opening Aptana Studio 3 for the first time, an Eclipse Launcher popup screen will ask for workspace instructions. A workspace is a concept used for grouping related Aptana settings, related projects and related configuration pertaining to these projects. Workspaces are saved as individual directories.

In the case where a known workspace already exists, the Browse… button can be used to set its location, otherwise, a new workspace can be created. Multiple workspaces can be used. By activating ‘Use this as the default and do not ask again’ Aptana Studio will automatically use this workspace in the future without prompting. 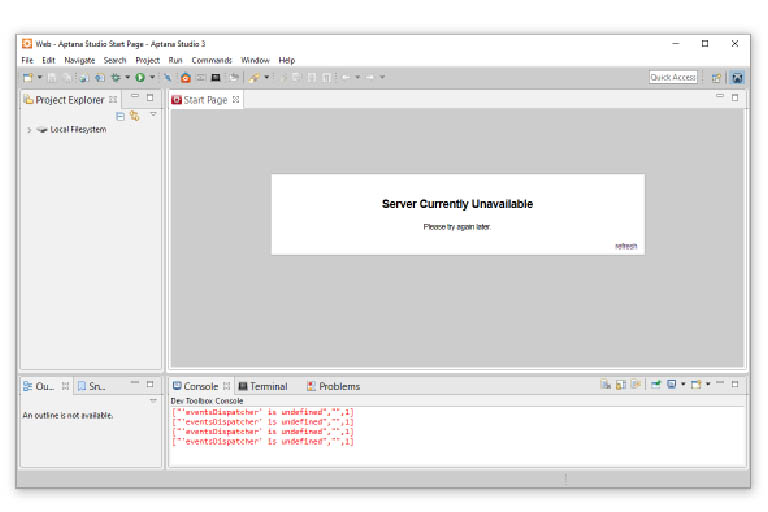 After the workspace has been determined, an empty instance of Aptana Studio 3 will open. From here, a new project can be created by choosing New and the type of project from the File menu. 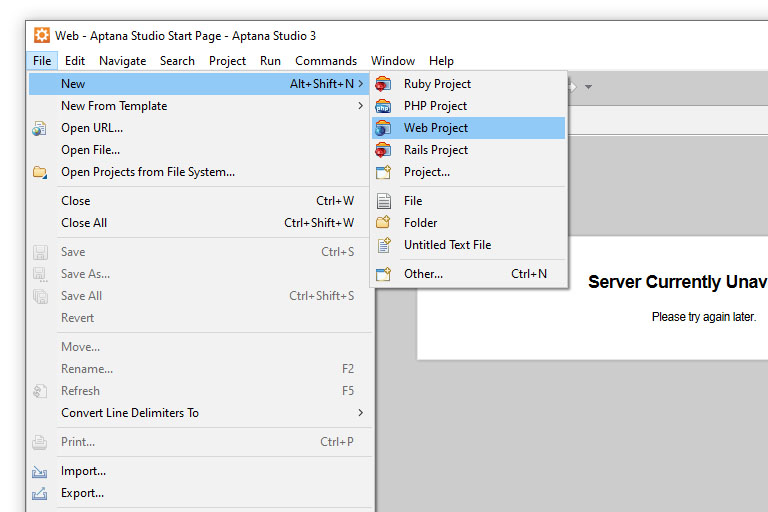 In this case, a new Web Project was created. Depending on the type of project, Aptana might have different project templates to choose from. It is probably better to start off with the most basic template. 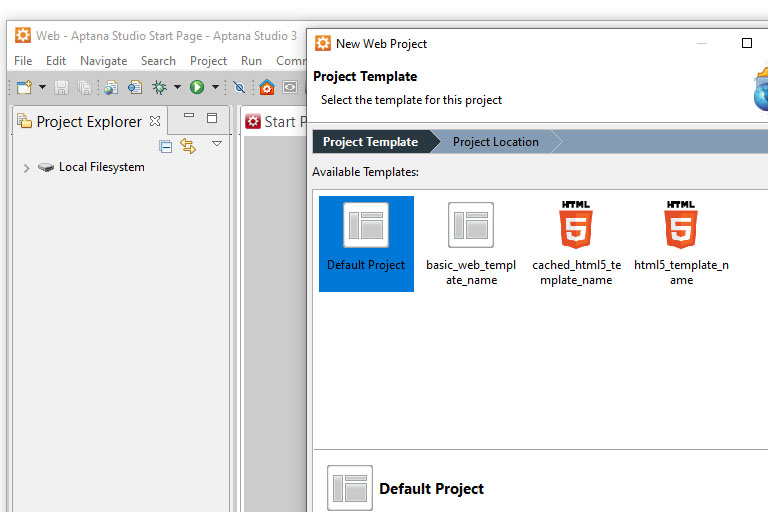 In this Web Project, the Default Project template was selected before pressing the Next button.

The next screen will prompt where the project is to be saved. The name given for the project will be used to create a new directory. The project can either be saved within the workspace directory (determined earlier) or at a different location by unchecking the ‘Use default location’ button. 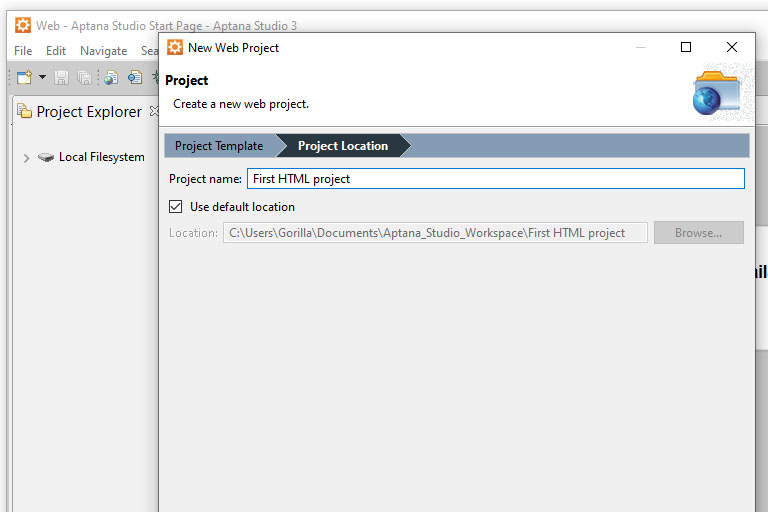 Note that if the directory already exists within the desired location (e.g. an existing copied/cloned directory with project files), Aptana Studio won’t be able to overwrite it. In this case, the directory will have to be imported into your current workspace (File -> Import…).

The Import wizard will have a couple of options. For the purpose of using an existing directory as a new project choose ‘Existing Folder as New Project’. This will convert the directory into a new project and without copying the files into the workspace. This means that the project directory and its contents will remain where it is.

Multiple projects can be created in the same Workspace.

After closing Aptana Studio 3, the workspace will be saved automatically.

To be able to develop on a remote location, e.g. on a web server, Aptana Studio 3 has a remote connection manager built into each project. The remote connection can be set up by double-clicking on the Connections options inside the project structure. 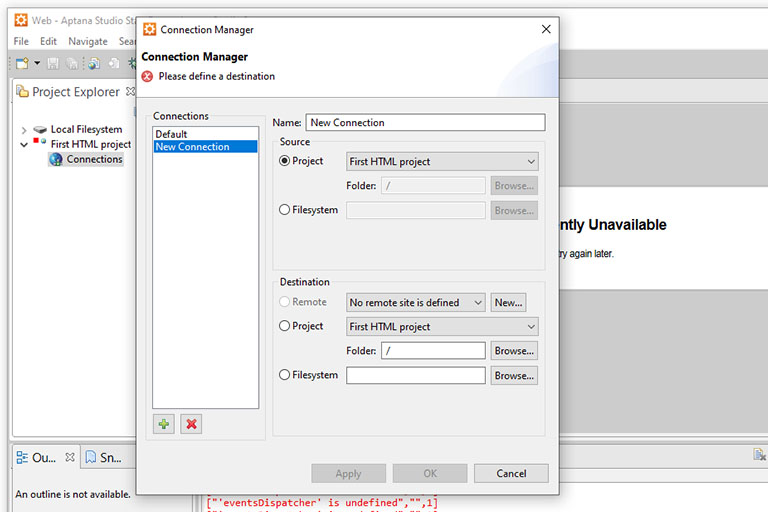 Aptana Studio 3’s remote connection manager enables the use of FTP, SFTP and FTPS. To create a new Destination, click on the New… button and fill in the required fields. 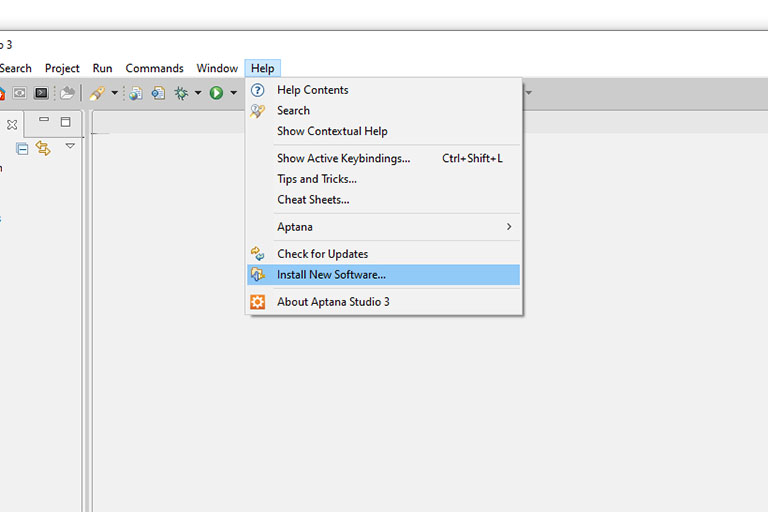 In the Work with: text box of the Install window, type the following URL for the update site and hit the click on the Update button or hit the Enter key: 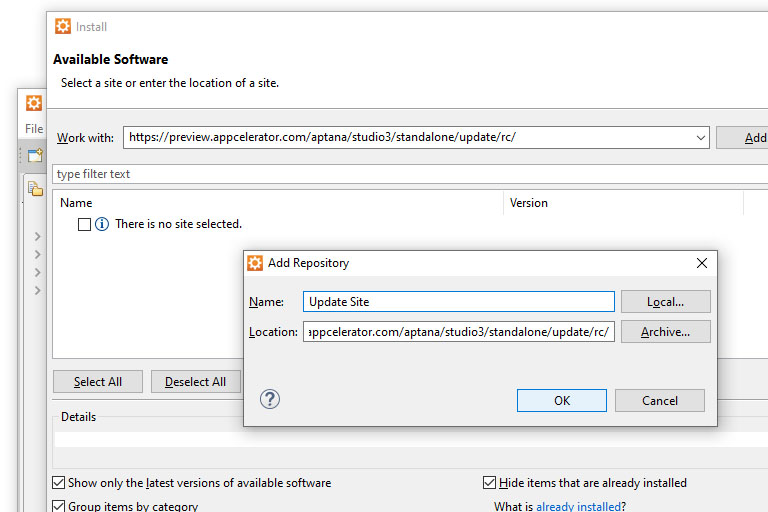 Giving the update repository a Name is optional. The update site should load, after which the Install window can be closed.

Now Aptana Studio 3 can be updated by selecting Check for Updates situated under the Help menu.

Although one gets the impression that Aptana Studio 3 is not actively maintained anymore, it is still a good, free IDE that can be used for projects.

This post showed how to install Aptana Studio 3 and how to get started.