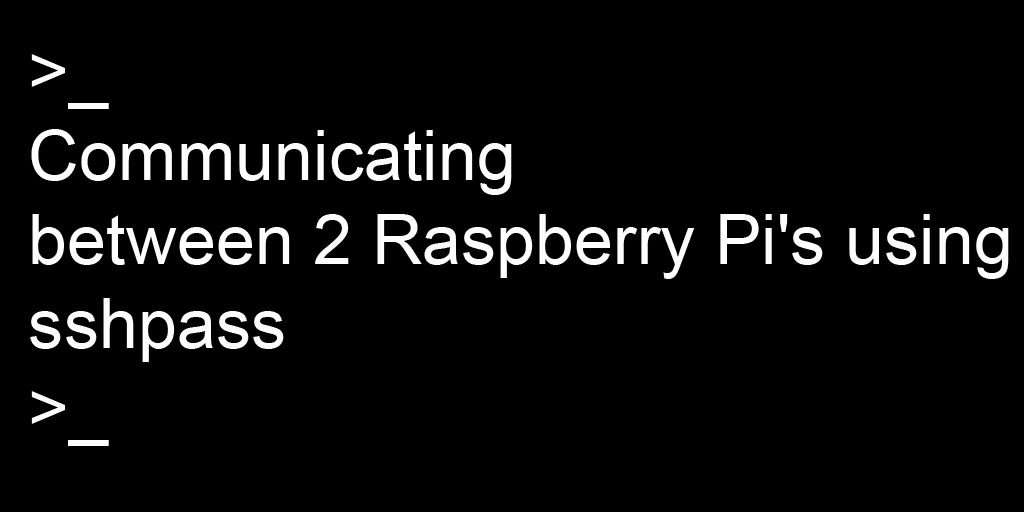 sshpass is a Linux package that can establish a direct, secure connection between two Linux-operated computers. It uses ssh that allows remote access from a local computer.

In the case where the Raspberry Pi OS (formerly known as Raspbian) is installed, sshpass can be used to gain terminal access from one Raspberry Pi to another Raspberry Pi.

In a home automation system, one Raspberry Pi is used to compute certain functions and, depending on the outcome, it uses sshpass in the background to trigger a command on a different Raspberry Pi.

There are other ways to connect between two Linux computers, e.g. using PuTTY, but might need manual execution. sshpass commands can be used with Bash scripts and Python scripts to automate commands. Commands can also be executed in a screen session.

An example command using sshpass would be:

Both Raspberry Pis are running Raspberry Pi OS (Raspbian) and are connected to the same local area network (LAN).

If no keyboard and screen are available, a connection using PuTTY can be used.

For sshpass to work, SSH needs to be enabled on both Raspberry Pis.

Although not a must, a static IP address to at least the remote Raspberry Pi is recommended.

In this post, ‘remote’ and ‘local’ will refer to what the Raspberry Pis are to be used for after the setup is complete — even though technically both will be accessed remotely if for example PuTTY is used.

In order for sshpass to work, and Raspbian to allow and to remember which remote user connection can be trusted or not, authorisation will be required during the first connection attempt.

When authenticity has been successfully established between two systems, sshpass commands can be triggered without having to supply a/the password every time.

The authorised settings will be saved in the form of 4 files in the /home/pi/.ssh directory. If no remote hosts are authorised yet, (e.g. on a freshly installed Raspbian) this directory will be absent:

In the case of a “-bash: cd: /home/pi/.ssh: No such file or directory” error, no connections are authorised yet. In this case, this directory is already available and there are files present, there are already connections that have been authorised.

If absent, the /.ssh directory can be created by running the following from the /home/pi directory:

To make a backup of the /.ssh directory use:

This will copy the contents of /home/pi/.ssh to /sshbackup-directory. A different backup directory can be used.

Setting up Raspbian to use sshpass

To establish authenticity between the ‘remote’ and ‘local’ Raspberry Pis, I recommend creating a ‘local’ file which is then copied to the ‘remote’ Raspberry Pi. To make things easier, this file needs to be in the same directory on both systems.

This will enable the initial process to create the correct SSH system file(s) to allow future connections without the need of a password – making the process more automated. By using a text file, it can be also be used in future to see what systems (hostnames) have been authorised on the ‘local’ Raspberry Pi.

From the Raspberry Pi where the commands are to be executed on, apart from the username and password and a text file that will be copied, the following will also be required:

For explanation purposes, the username will be pi, the password will be raspberry,the IP address will be 192.168.1.16 and the host name will be hostname. Make sure to replace them with your own settings.

After logging into the ‘remote’ Raspberry Pi’s terminal, create a text file in the /home/pi directory

and copy the following text (with your own details) into the file before exiting and saving (Ctrl + X, then Y):

From the Raspberry Pi where the commands are executed from, apart from sshpass the username, password and IP address of the ‘local’ Raspberry Pi will also be required.

sshpass can be installed with the following terminal command:

Secure copy (SCP) can be used to copy the previously created text file from the ‘remote’ Raspberry Pi:

Authenticity might already be established, but in the likely event that it is not, the following message will show:

Type the password for the ‘remote’ Raspberry Pi (in this case it’s raspberry).

The file will be copied to the ‘local’ Raspberry Pi and the authentication of the ‘remote’ Raspberry Pi will be permanently established (and saved in one of the files in the /.ssh directory).

As previously discussed, sshpass will run commands on a local Raspberry Pi after being triggered remotely. To use sshpass from the ‘remote’ Raspberry Pi:

sshpass is a Linux software package that uses SSH that can establish a direct, secure connection between two Raspberry Pis. It allows remote access from a local Raspberry Pi that can run commands manually or in the background.