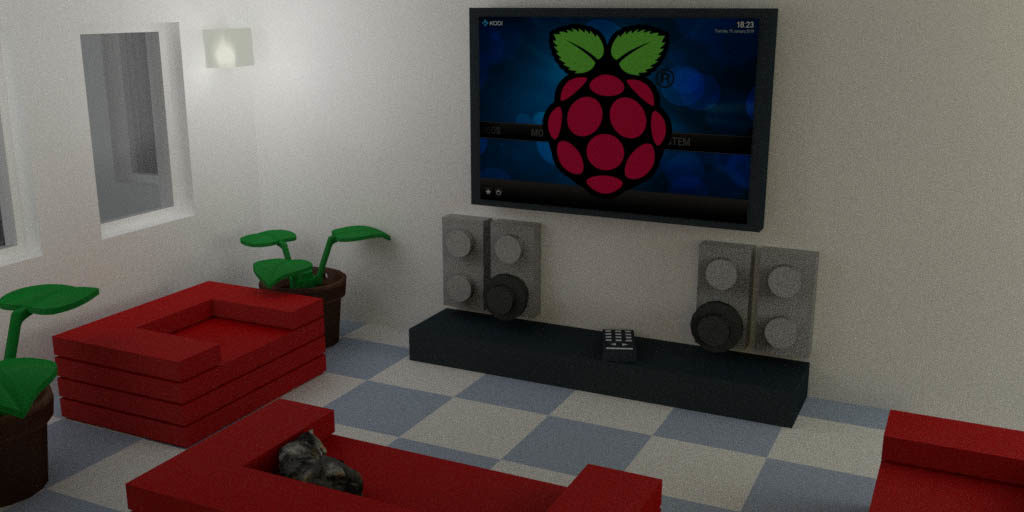 With a plethora of mini media centre boxes becoming readily available, it comes as no surprise that open source platforms are also available for this purpose. Kodi is one such platform and it is available to be installed onto a Raspberry Pi.

Kodi (formerly known as XBMC) is a free, open-source media player available on various platforms including Linux, OS X, Windows, iOS and Android. With its ’10-foot user interface’, Kodi is optimised to be used on television screens with remote controls.

Local network locations are easy to set up, so for your own music, movies and videos files, Kodi simply needs to be instructed where they are stored. With additional plugins, streaming channels (and there are many), can also be added to your favourite watching lists.

The Raspberry Pi (the hardware)

Model B Raspberry Pis are almost perfect to be used as low power, stand-alone media centres. Since the model 2s, Raspberry Pis have enough memory and computing power to stream and serve media well. When comparing these Raspberry Pi models with other mini media centres, they are much cheaper, readily available and really not difficult to set up.

With model B boards having HDMI output, USB ports, Ethernet and sound output, these single-board computers have all the tech necessary to play well with TVs, speakers and remote controls. In addition to this, the Raspberry Pi 3 Model B has Bluetooth and Wi-Fi, which makes an even better choice.

Apart from a Model B Raspberry Pi 2 (or higher) and Kodi (see below), you will need the following:

For the Raspberry Pi, Kodi is available as Xbian or OpenELEC. Both of them are installed as an operating system onto the MicroSD card before inserting it into the Raspberry Pi.

The recommended installation process differs between XBian and OpenELEC. Whereas OpenELEC is installed similarly to most other Raspberry Pi operating systems, XBian has its own installation tool.

Note that other Kodi-related posts on Behind the Scenes are based on OpenELEC.

Manually updating Kodi’s media libraries
Although Kodi is quite comprehensive with a lot of automatic functionality (build-in or via plugins), there are still some things that needs to be done manually. Cleaning and updating the media libraries are unfortunately some of them. More…
Categories
Raspberry Pi
Tags
KodiOpenELECRaspberry PiRaspberry Pi casesRaspberry Pi powermedia centre