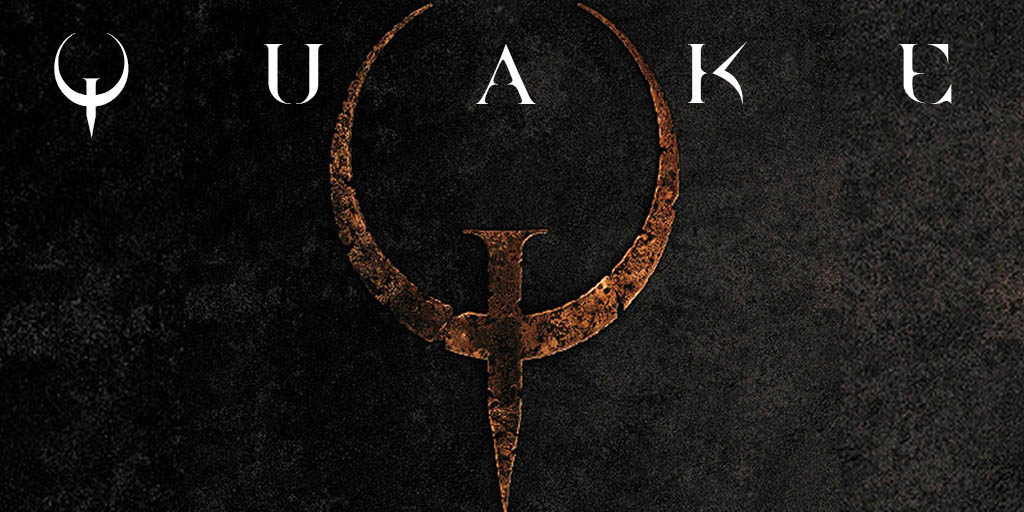 Since its release in 1996 (more than 20 years ago), Quake 1 can still be enjoyed today. Reviving Quake with accelerated graphics on Windows 10 shows you how.

With its, then, groundbreaking 3D graphics, revolutionised game engine and awesome multi-player mode, Quake (now known as Quake 1) is still fun to play alone, or with a few friends.

Although the full PC version of Quake can be purchased for a small price (e.g. Steam), this post will show how to use the latest Quake demo (Shareware 1.06) and turn it into the full version using the original CD. Overall, this method will make the game use the original music from the CD and add support for Windows and OpenGL.

To be able to enjoy the full version of Quake, you will need access to your own Quake CD. The Quake CD files will not be supplied, but a method to install them on your hard drive is shown at the end of this post.

This process has been tested on Windows 10 (64-bit), but will probably work for any Windows subsequent to Windows ME. An external USB CD ROM drive was also used.

Assuming c:/quake as the install directory (recommended), the shareware should be installed to c:/quake (the default location). It will install the executable files required to run the DOS version (quake.exe), GLQuake (glquake.exe) and WinQuake (winquake.exe). GLQuake and WinQuake are source ports of Quake (also called game engines). The DOS version of Quake will most likely not work in Windows 10, but WinQuake and GLQuake should be playable.

This shareware version of Quake can be uninstalled using the Windows Control Panel -> Uninstall a program.

Quake and its source ports are best launched using shell command lines. Fortunately, the Windows Command Prompt can be used for this. To find the Command Prompt, search for cmd using Windows’ search function (situated next to the Windows icon in the bottom left of the screen). 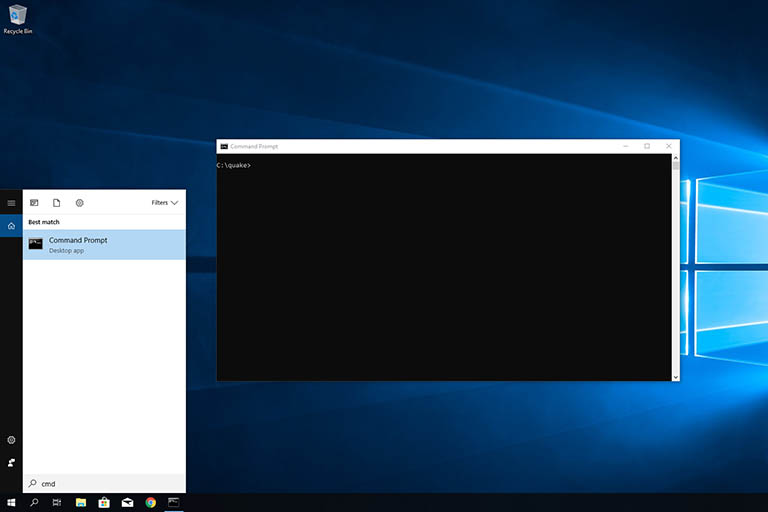 In its simplest form, the game is launched by typing its executable (.exe) file and then the pressing the [Enter] key while in the Quake directory. Assuming Quake was installed in the c:/quake directory, the following set of commands can be used to, for example, launch WinQuake:

Quake was also built to be launched with various command-line options. These options are added after the executable command in the form of -'command option' [command input], e.g. quake -width 800. Multiple options can be used at the same time. Each source port of Quake (e.g. WinQuake, GLQuake, etc.) has its own set of command-line options. GLQuake can, for example, be launched using:

The Quake Console (or simply Console) allows for additional commands while in the game. Commands can vary from changing game settings to showing information. The easiest way to open (and close) the Console is by pressing the ~ key on the keyboard.

WinQuake (released in 1997) is a source port of Quake to make the game playable in Microsoft Windows (Win95/98 at that time). Although WinQuake does not make use of OpenGL, it allows for high-resolution video and windowed modes. WinQuake can be launched from the Command Prompt using:

This will open WinQuake in full-screen mode. In the case where the launch window gets stuck, press Alt + Tab a couple of times until the window opens. Alternative video modes can be set under Video Options (under the Options menu).

GLQuake (released in 1997) is a source port of Quake that enables the use of the OpenGL graphics library. At the time of its release, the Glide API and full OpenGL were supported.

To use OpenGL as is, nothing has to be done. GLQuake can be launched from the Command Prompt using:

This will run GLQuake in full-screen mode at the default resolution of 640×480 with a 16-bit colour depth. In the case where the launch window gets stuck, press Alt + Tab a couple of times until the window opens.

To confirm the video mode, the following command can be used in the Quake Console:

GLQuake can also be launched in window mode by adding the -window command-line option.

Upgrading to the full version using the Quake CD and DOSBox

While the shareware version might bring back memories of the good old days and allow for basic tweaking, the full version of Quake is what we’re really after. Fortunately, the game can be upgraded by doing a one-off installation of Quake (from the CD) using DOSBox.

DOSBox is a free, x86 emulator which recreates the DOS environment in Windows. 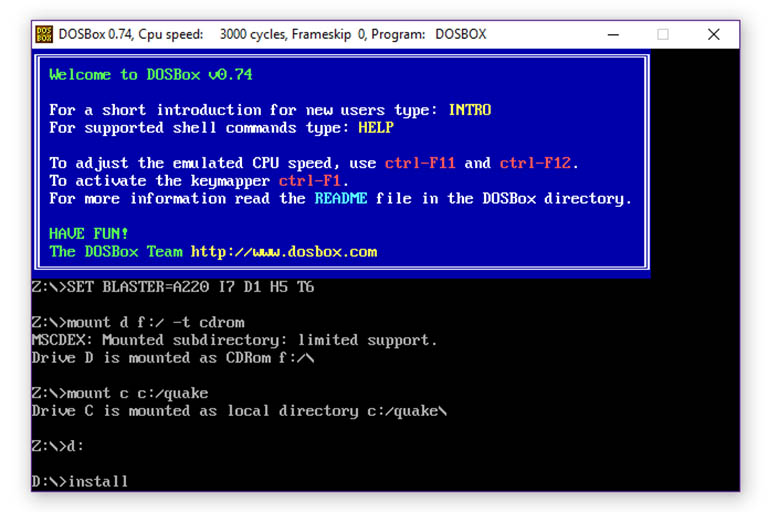 For DOSBox to emulate the CD drive and directory structure correctly, they first need to be ‘mounted’. Assuming the Quake CD is inserted drive D:/, it is mounted in DOSBox as follows:

Assuming the install directory for Quake is c:/quake, it is mounted as follows:

With the mounts specified above (i.e. the /quake directory mounted to DOSBox’s c:/ drive), the game should be installed on the root of the mounted C drive. To move to the CD ROM drive and to install Quake, the following DOSBox terminal commands are used:

During the Quake installation, some files might need to be replaced (i.e. choose yes when prompted to overwrite files). After installation, the DOS version of Quake will be launched in DOSBox.

To exit Quake, use the quit command in the Console and to exit DOSBox, use the exit terminal command.

WinQuake and GLQuake can be launched as discussed earlier, but will now run the full version of the game. By keeping the game CD in the CD ROM drive, the original Quake CD soundtrack will be automatically used as music.

To uninstall the full version of Quake, the freeware version needs to be uninstalled (see earlier) after which the c:/quake directory is deleted.

The original Quake can be revived on Windows 10 using OpenGL. To do this, the latest Quake demo (Shareware 1.06) can be installed, updating the .exe file and turning it into the full version using the original CD.

3 thoughts on “Reviving Quake with accelerated graphics on Windows 10”