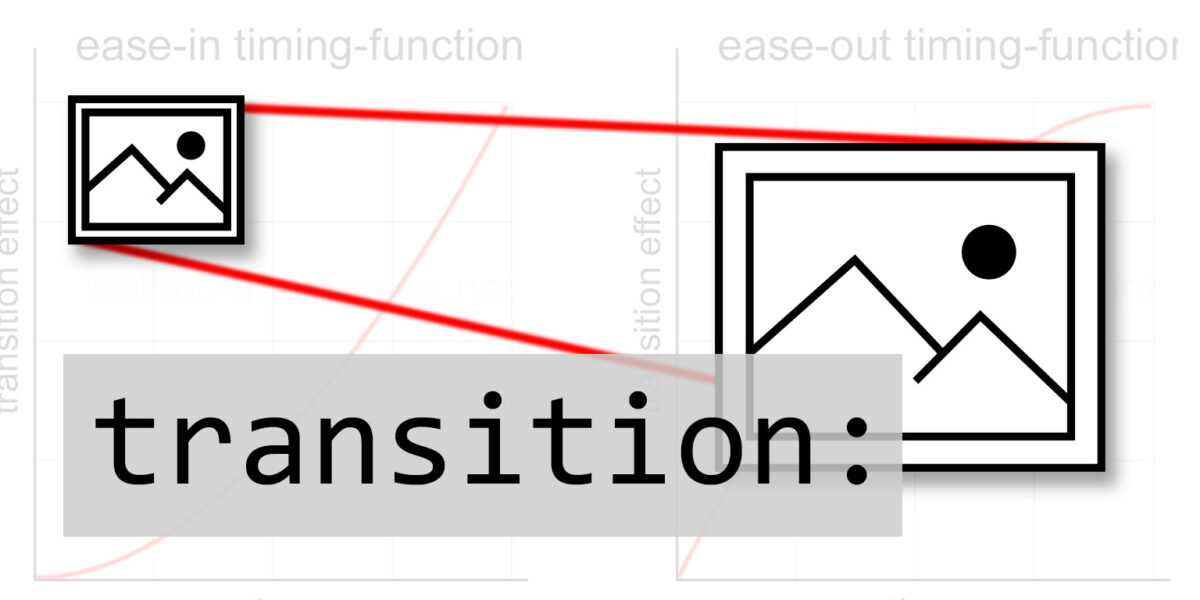 CSS transitions allow properties to change over time. I.e. elements can transition smoothly from one property value to another using the desired time interval.

CSS transitions are amongst the first types of ‘CSS animation effect’ many new CSS developers will come across. They are easy to use and understand while they can have a big impact on the look and feel of a web page.

In its simplest form, a transition allows the change of a CSS property from one value to another value over a certain period of time. In other words, they are used to control the animation speed when changing CSS properties.

The change will take place according to a pre-set speed curve (i.e timing-function) where the intermediate states are automatically calculated.

The example above shows the shorthand of a simple CSS transition effect. Instead of changing instantaneously, the text colour of the element containing the .transition class, will transition from black to red over a period of 1.5 seconds when hovered upon. By using ease-in, the transition will start slow and end off at a steady speed.

Note that :hover effects are not possible on mobile devices.

Apart from using pseudo-classes, normal CSS classes, CSS transforms and JavaScript methods and events can also be used to add a CSS transition.

Colour (color) is not the only property that can be used for CSS transitions. Other properties such as font-size, background-color, opacity, text-decoration, margin, padding and many, many more can also be used.

Transitions vs. no transitions

CSS property changes are traditionally immediate. The example below uses the :hover pseudo class to change the background color from red to grey:

By hovering over this block, the colour change is almost immediate (i.e. there is no transition over a period of time)

By using CSS transition, the colour of the block can be changed over a period of time.

By hovering over this block, the colour turns from red to grey over a period of 1.5 seconds.

CSS transitions define the transition between two states. In its simplest form, these states need to be within the same CSS property (e.g. color: red; to color: blue;). CSS properties are the ‘things’ within CSS selectors that values can be assigned to.

Both states need to be defined separately and the transition state need to includes the transition properties. A separate state can be triggered by, for example, using a seconds class, a CSS pseudoclass or element.style or element.classList.add methods in JavaScript.

Using the second example from above again:

The .example class contains the CSS property of the original state (in this case background-color: red;). The transition state (.example:hover) indicated the state to where the desired property needs to transition too.

In JavaScript, transition properties are defined using the element.style method:

Transitions are done using CSS properties. In its simplest form, a CSS transitions consist of 4 properties:

Alternatively, the shorthand transition property can be used as follows:

The transition-duration property sets the amount of time (in seconds) the transition will take to occur.

When a transition effect is plotted over time, the ease timing-function will look as follow:

The ease-in timing function will make a transition start off slowly, and then accelerate until the end.

When a transition effect is plotted over time, the ease-in timing-function represented over time will look as follow:

The ease-in timing-function in action can be seen by hovering over the red area:

The ease-out timing-function makes a transition effect start quickly and then decelerate gradually until the end.

When a transition effect is plotted over time, the ease-out timing-function will look as follow: 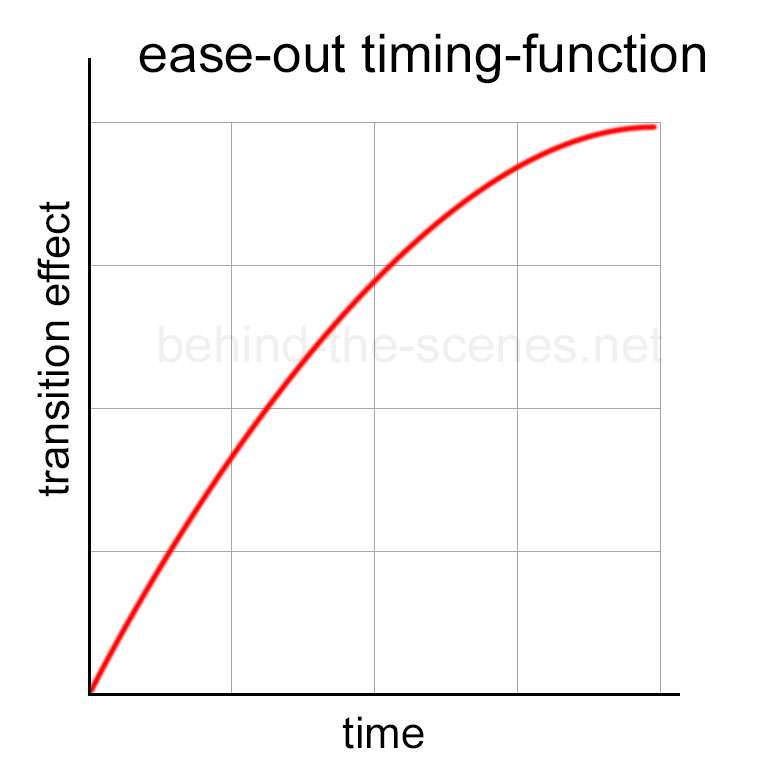 The ease-out timing-function in action can be seen by hovering over the red area:

The ease-in-out timing-function makes a transition effect start quickly and then decelerate gradually until the end. It is similar to the ease timing-function, but with a slower start.

When a transition effect is plotted over time, the ease-in-out timing-function will look as follow: 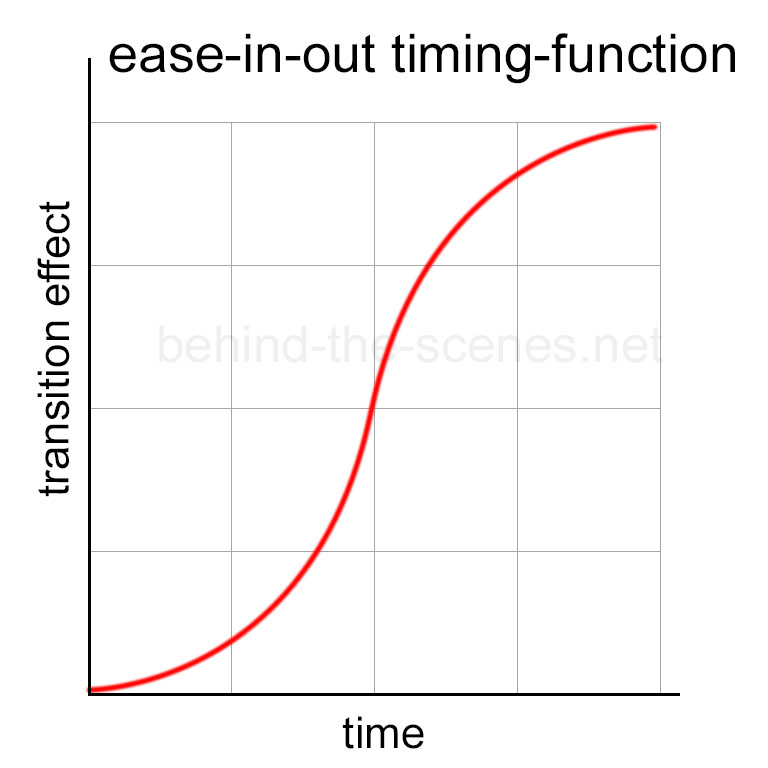 The ease-in-out timing-function in action can be seen by hovering over the red area:

The simplest transition timing-function is linear. This means the transition will take place evenly over the given time. In other words, it will happen without any acceleration or slowing down, at the same speed.

When a transition effect is plotted over time, the linear timing-function will look as follow:

The linear timing-function in action can be seen by hovering over the red area:

Transition timing-functions can also be used in combination:

which will the following result:

As with the transition-duration property, delay values can either be set as full or fractions (e.g. 0.1s, 1.2s or 2s).

Multiple CSS properties can be transitioned in the same animation:

Transitions are commonly used when hovering over input buttons. A transition can be used for color:, background-color:, font-weight:, width/height:, text-decoration:, etc.

In responsive design, transitions can also be used for elements to show and hide them off or from the screen. CSS properties in these cases include opacity and top/bottom/left/right positioning.

In a similar manner, CSS transitions can also be used as a delay for showing an element, e.g after a page has been loaded.

CC transitions vs. other CC animations

A transition is a change of CSS properties from one value to another value over a certain period of time. Unlike animations, transitions can’t change CSS properties themselves. Start and values can also not be defined.

Translations (translate) can also be transitioned.

A note on design

As with all animations, make sure that transitions are layout/design appropriate. One doesn’t want to, for example, use a radical, bouncy effect on a formal-looking website — except if that is the intended vibe.