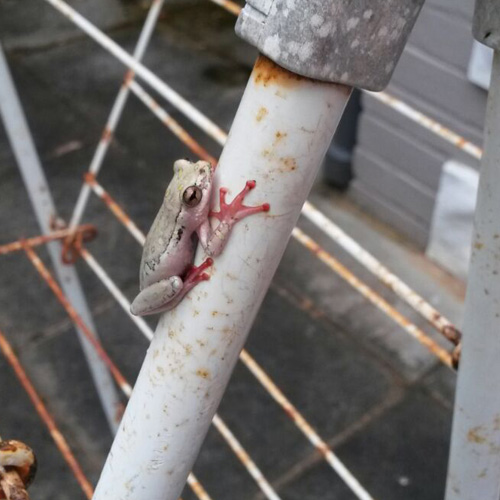 The one in this photo is Hyperolius marmoratus marmoratus and had a whitish pink skin with a grey/light-brown irregular patterned back and distinctive red inner limbs and webbing.

This little bugger was found December 2014 in the urban areas of the South Coast South Africa. More specifically Umtentweni area. I’ve also seen one on the South Coast Ramsgate area, but it didn’t end well for that one.

It was actually funny that in my excitement in trying to catch the frog – you know, just to look at it with my hands, at actually jumped up against my fore head and sat there for a few seconds before doing a rope less bungy to the ground. It jumped straight back up onto the washing line again, so I assumed it was okay while we were taking some photos.