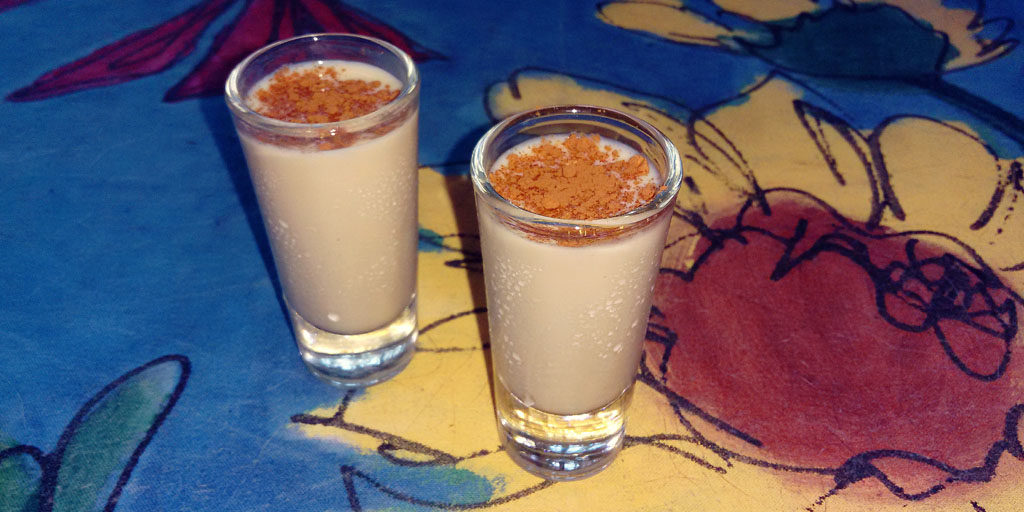 Probably one of the oldest, well-known recipes in South Africa is the traditional Milk tart – an open pastry case with a sweet creamy filling covered with cinnamon. Although ‘Melktert’, as we call it in Afrikaans, is still a huge hit among young and old, this post is about Milk tart shooters.

The shooter form of the Milk tart is still as sweet, still as creamy, but drinkable – with a kick of liquor.

There are at least two commercial Milk tart shooter mixes available in South African bottle stores, but with this recipe, you can make a better, custom mix to your own taste. It also works out significantly cheaper, which means more shooters for more people.

To make the minimum of about 1 L you will need:

The ideal ratio for a proper amount of Milk tart shooter mix is 2:1 – two parts mix (two tins each) with 1 part Vodka (375 ml or Half-jack). This will make about 2 litres.

The amount of Vodka can be increased, but stronger mixtures tends to taste more like ‘cough medicine’.

You can be fancy about this and do some whisking, but in essence, just mix all the ingredients together in a mixing jar and pour into an appropriate sized bottle. You can also be clever and pour the mix together into a quarter bottle of Vodka.

Shake the bottle to blend the mixture together and keep the mixture refrigerated until served.

Shake the bottle well before pouring into shooter or shot glasses. Shooters can be sprinkled with ground cinnamon. Milk tart shooters should be enjoyed chilled. The mysterious Mussolini cocktail
After a seriously long drought of cocktail hunting, while out with a couple of friends, I accidentally stumbled upon the what ended up as being a bit of a random cocktail, the Mussolini. More…
Categories
Drinks
Tags
Cane spiritCherry SoursStrawberry liqueurStroh rumTequilaTriple Seccocktailsdrinkginred cherriestall glassvodkawhite rum

The Boksburg Bomb
So I was invited for a drinks night out with a local, ex-Boksburger and a friend. It was rough, is all I can say at this point in time. The so-called Boksburg Bomb is a bomb shot mixed drink containing Red Bull, a shot of Tequila and shot of Stroh rum. More…
Categories
Drinks
Tags
Red BullStroh rumTequilaThe Boksburg Bombbomb shooterdrinkshootershot glasses

Pursuit of the perfect Bloody Mary
For those of you who are not familiar with the term, a Bloody Mary is a somewhat different, healthy fruit (tomato) cocktail with a healthy shot of vodka… More…
Categories
Drinks
Tags
bloody marycocktailsdrinktamato juicevodka